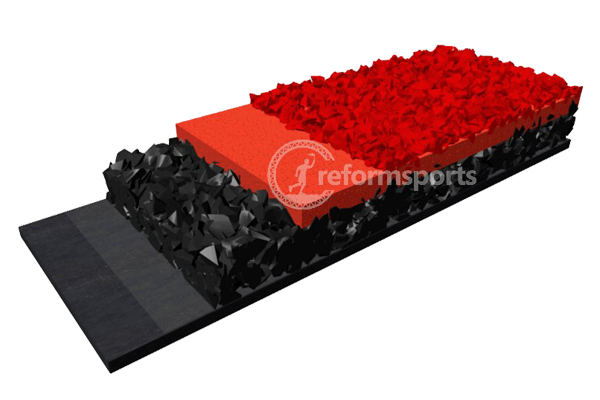 Runway area is leveled according to the measurements. The soil is compacted with a roller and a 10 cm thick ‘finisher’ plumbing filler is laid on a suitable slope. This filler is a “coarse crushed stone” consisting of stones and gravels that do not pass through a NO: 4 (4.75 mm) sieve. Subsequently, a ‘fine chippings’ material passing through a sieve NO: 4 (4.75 mm) is laid on the “Filler”.

These two layers of plant mix, which are blended with water, are completely dried and hardened and then flattened by roller compaction. The inner edge of the athletics track is provided with a suitable inclination for water discharge. 6 cm thick; asphalt, mineral aggregate and mineral fillers and asphalt binder with all the ‘asphalt binder layer’ is applied. On top of this, wear layer, which is a hot mixture of binder crude oil-based asphalt cement and mineral aggregate, is laid. By applying the wear layer again crushing, compression, straightening operations are started.

In order to prevent water accumulation, a slope of 0.5 – 0.7% is given towards the inner line of the runway and a water channel with a cover is installed in this section.

In addition, according to DIN 18035, if there are code differences on the ground which cause fluctuations of more than 3 mm in the 4 m plane, these areas must be filled with a mixture of pure polyurethane and quartz sand before the synthetic coating and the runway must be completely leveled.

(Although asphalt cannot be provided although it is preferred first, concrete can be applied.)

If concrete is to be laid as the subfloor, BS 18 concrete complying with Turkish Standards should be used. In order to increase the heat and load resistance, at least 360 kilograms of cement should be used in aggregate and cement mixture. In order to increase the strength on the concrete floor, the concrete should be equipped with steel mesh and Q 131 material should be used for this mesh. The concrete floor should have a total thickness of 10 cm. After the casting process is finished with sufficient slope in the appropriate direction, the surface should be polished to form a smooth surface. There should be no fluctuations exceeding 3 mm in this 4 m plane. Areas with more errors than international norms should be corrected by self-leveling screed application.

Synthetic flooring should be started after the concrete moisture level has decreased to 5%.

In the second stage of the production of Sandwich System Athletic Track which has to be made according to certain rules and criteria, synthetic floor covering processes are applied according to German Standard DIN-18035/6 and International Association of Athletic Federations (IAAF) standards.

The formation of the synthetic substrate starts with the application of primer to the substrate. After this layer is cured, SBR granules of 1 – 3 mm diameter bonded with Polyurethane Prepolymer (Binder) selected according to the climate as elastic layer are laid on the floor with special machines. After the elastic layer, which is applied as 10 mm, is cured, black SBR granules mixed with 1 layer of two-component polyurethane will spread to the floor in order to fill the pores of the previous layer.

When this layer, which is called as base system, is cured, after the completion of the areas to be modified; 3 mm. thickness of tile colored pure polyurethane binder should be applied. While this layer is not yet cured , EPDM granules with a diameter of 1-4 mm, tensile strength> 7.0 N / mm², breaking elongation> 650%, hardness degree of Shore A 62, ozone resistance of 200PPHM should be deposited in the floor by sprinkling. The final thickness of the synthetic coating thus completed should be 13 mm.

The entire system, according to IAAF technical specifications, the power absorption property shall not be less than 35%, standard deformation 1.1, resistance to studded shoe to DIN 18035/6, ​​class 1, waterproof, tensile strength 0.55 N / nmm², tensile strength% 54.

After the Sandwich System Athletic Track production is finished, the remaining granules on the surface should be swept and the runway should be cleaned and finally the lane lines should be drawn with the help of special line paints.

Athletics Track Construction Cost varies according to the type and thickness of the ground to be used, the size and location of the site to be built. To get a price according to your project, you can get an offer from us by specifying the details.